Properties for sale in Alicante

Alicante city with its 320,000 inhabitants is the largest city in the province of Alicante. This bustling metropolis depends mainly on international trade, tourism and the housing market. Important drivers of these economic pillars are the port of Alicante, the airport El Altet and the railway from Madrid.

Alicante is also a student city. Among other things, it has a large university with more than 25,000 students. The pleasant climate has always been a great attraction for home buyers from Spain and abroad. It is therefore not surprising that more than 15% of the population is immigrant. Alicante is used to a large number of foreigners and this is noticeable in the hospitality of the inhabitants.

What are the most popular housing types in Alicante?
You can distinguish between the urban and rural areas of Alicante. In the urban area, apartments are the most sought after. In the outlying areas it is the detached villas on large plots and rural houses.

Apartments in Alicante
Both foreign buyers and the Spanish choose apartments the most within the urban area of ​​Alicante. You have everything at hand here; beaches, shops, restaurants and public transport. The urban areas of the city are mainly on the coast. You will find many high-rise buildings here. Compared with detached houses, apartments are a lot more affordable. In general, the closer to the sea, the more expensive a home is.

Detached houses in the suburbs
In the outskirts of Alicante you have many neighbourhoods with detached villas on spacious building plots. These types of homes are particularly popular with foreign buyers. Some examples of suburban neighbourhoods are Lloifru (Monnegre) and El Portel de la Moleta to the north and El Pintat ,Valle grande, San Jaime, Alabastro, La Cañada del Fellonar to the west of the city.

Country houses
These types of houses are often referred to as fincas and are built on spacious plots in the “real”countryside. These homes are generally more popular with the Spaniards, probably because the houses are often passed on to the next generation. In addition, they are relatively unknown areas for foreign buyers, although this is increasingly changing and the homes are being offered more on the local housing market.

Where is the best place to buy a detached house?
The most popular are the neighbourhood areas further from the coast. In general, foreign buyers choose somewhat higher-lying neighbourhoods with a good view of the surroundings or the sea. Examples are Lloifru near Monnegre and the area in and around Moralet. Spaniards seem to value the view less and prefer areas such as Fontcalent, Rebolledo and Cañada del Fellonar.

House prices in Alicante
Alicante is divided into 5 geographic districts.Each district or area consists of several districts. Price-wise you can also use this division.

The centre around the harbour
District 1 covers a number of neighbourhoods in and around the old town around the Santa Barbara Marina and Castle. This area is popular with foreign home-buyers because of the large amount of amenities and its favourable location. The prices of apartments are quite high. On average, you pay about €245,000, or €1965 per m2 for a home.

Near the old centre and Alicante east
District 2 is the area north-east from the old centre of Alicante to the town of Sant Vicent del Raspeig.This part of the city is mainly suitable for permanent residence and attracts mainly Spanish buyers. You will also find all the facilities you need here. This district contains both detached houses and apartments. The most expensive is the small district of Ciudad Jardin. Here you will find mainly detached houses on plots of approximately 400m2 to 1000m2, in the middle of the city. On average, you pay € 286,000 for a home, which equates to €1,549 per square metre. You can also find cheaper housing in this part of the city; for example, the Colonia Requena, Virgen del Carmen and Virgen del Remedio neighbourhoods. The average price of an apartment here is €112,000 with the square metre price of €1113 per m2. These neighborhoods are mainly residential areas, hardly any holiday homes are bought here. Further down in this part of the city is the Virgen del Carmen district, where an apartment costs on average only €31,000. The price per square metre is €456. These are often in older buildings without a lift.

Alicante centre east and south
This is district 3 and is roughly the part against the western side of the centre and a strip along the coasttowards the south of the city. Here too, you will find mainly apartments which are especially interesting for the Spanish market. The average price for a home is approximately €138,000, which corresponds to €1,240 per square metre. The most expensive part is the San Gabriel district, on the coast close to the industrial port. A home here costs an average of €188,000. The square metre price is €1,446 in this district of Alicante.

Northern part against the city
District 4 includes the Cabo de las Huertas, Playa San Juan neighbourhoods and a number of neighbourhoods beyond, such as Vistahermosa and Santa Faz. This district is the most expensive part of Alicante.The neighbourhoods Playa San Juan and Cabo de Las Huertas have been very popular with Spanish buyers for years. Playa San Juan, in particular, contains many high-rise buildings in spacious complexes with swimming pools and sports facilities. Its popularity is mainly due to the beautiful 7-kilometre-longsandy beach and the many amenities in the district. In recent years, more and more foreign home buyers have also discovered this part of Alicante.

House prices in Playa San Juan
Playa San Juan, in particular, is popular for the purchase of a second home. On average, you pay €340,000 here for a home, with a square metre price of €2348. After the economic crisis, the housing market recovered fairly quickly here and a pleasant apartment can rarely be found anymore. It also applies here; the closer to the beach, the more expensive the house. Beautiful apartments on the first line quickly shoot upwards of €400,000.

Prices in Cabo De Las Huertas
Cabo de las Huertas is located south of Playa San Juan. It is by far the most expensive part of the city of Alicante. This part of Alicante is especially popular with Spanish buyers and you will find more diversity in types of homes; besides apartment complexes there are also terraced houses and detached villas. This means that the average price for a home here is also a lot higher, at €819,125, with the price per square metre of €2825. The most expensive are detached villas on the first line on the coast which start at roughly 2.5 million euros.

Vistahermosa
The Vistahermosa district between the centre of Alicante and Cabo de las Huertas. This is also a popular area with Spanish home buyers, especially as a residential area. Here again you will find more detached houses, which means that house prices are higher. On average, you pay around €460,000 for a house;that amounts to €1712 per square metre.

The countryside around Alicante
This is the last district and lies, as it were, like a shell around Alicante. Areas of interest to home buyers include Monnegre, Fontcalent, Moralet, Rebolledo and Cañada del Fellonar.The areas of Fontcalent, Moralet, Rebolledo and Cañada del Fellonar lie to the west of the city, from the Sierra de Fontcalent ridge and the A31 in the south to the town of Sant Vicent.Monnegre is more of a blob on the map and is located a few kilometres north of the town of Muchamiel.

House prices in Monnegre
In Monnegre you will find three neighbourhoods, Llofriu, Valle Del Sol and El Portel de la Moleta. Mos tinteresting for foreign home buyers is Llofriu. The peace, space and spectacular views are the main reason for this great interest. A building plot here must have a minimum size of 4000m2; it is not allowed to build on smaller plots .90% of the homes are owned by people from Germany, the Netherlands and Belgium, buyers who like peace and quiet. On average you pay €253,000 for a home in Monnegre. The square metre price is about €670.

House prices in Valle del Sol
The northern part of Valle Del Sol is also part of the municipality of Alicante and you will find buyers from Spain as well as from Northern Europe.

The El Portel de la Moleta district is a somewhat older residential area of ​​Alicante and more popular with Spaniards. On average, you pay €223,000 for a home in Valle del Sol. The square metre price isabout €627.

House prices west of Alicante
This includes the areas of Fontcalent, Rebolledo, Moralet and Cañada del Fellonar. Scattered throughout this area you will find various residential areas with detached houses on spacious plots and homes in the countryside. Prices vary roughly between €120,000 for a simple "finca" to over €500,000 for a luxury villa or country house, with a few exceptions. However, the average price of a home is €240,000 with a square metre price of €1100. 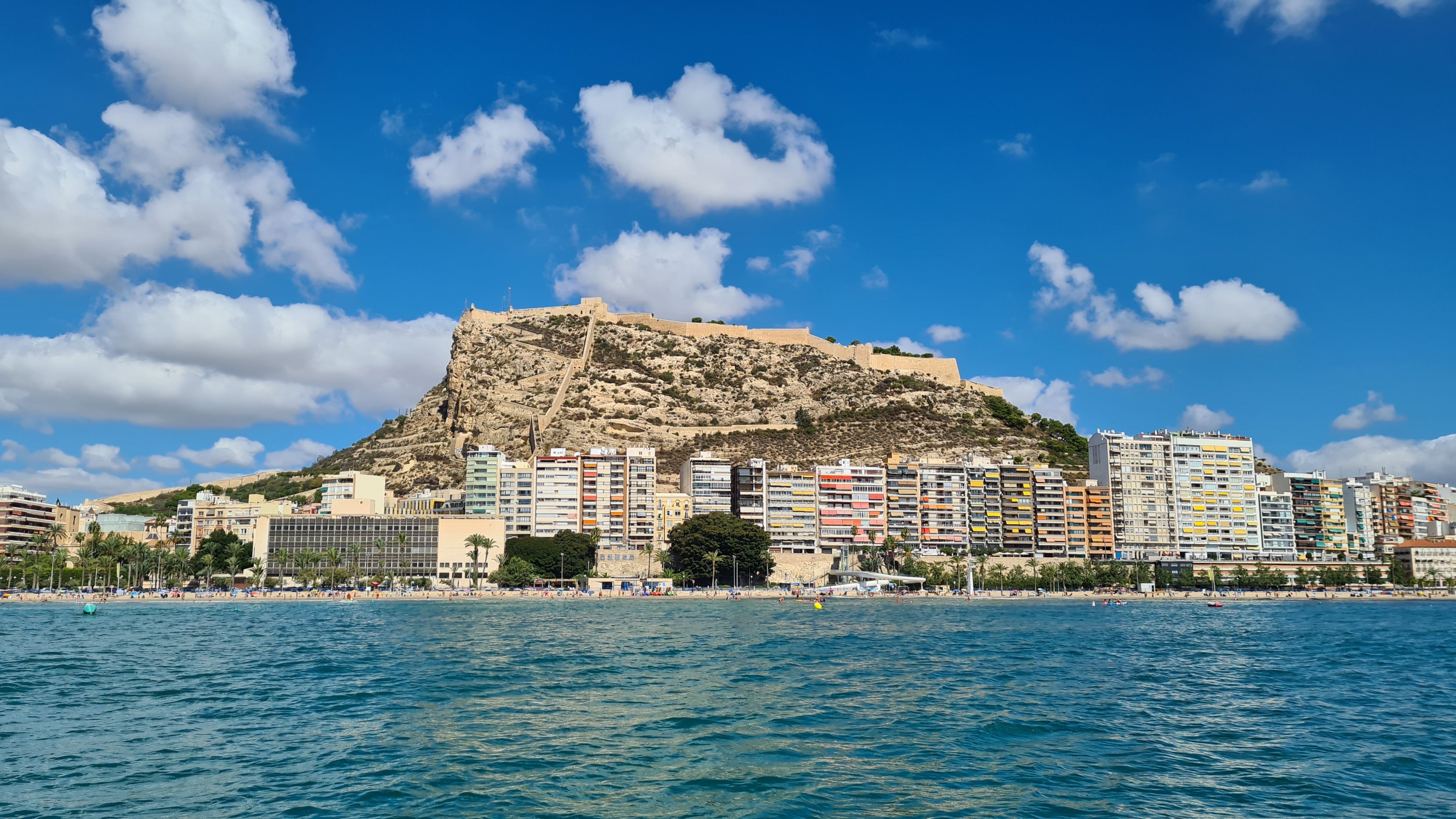